Japan improved to 2-0 in men’s football Group A on Sunday with a 2-1 win over 10-man Mexico behind goals from Takefusa Kubo and Ritsu Doan.

Japan lead Group A with six points, followed by Mexico and France with three points each and South Africa in last with none. 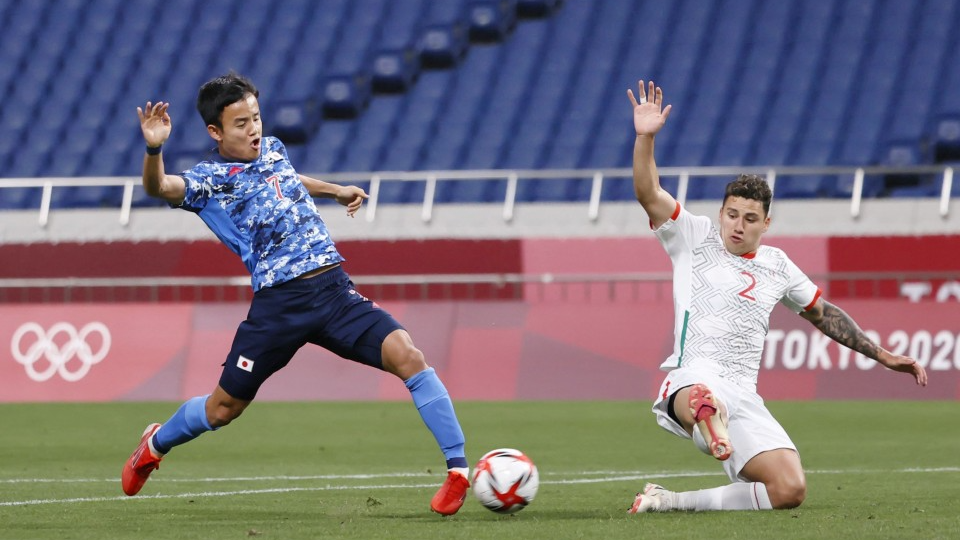 Japan’s Takefusa Kubo (L) opens the scoring against Mexico during the first half of their Group A men’s football match of the Tokyo Olympics on July 25, 2021, at Saitama Stadium in Saitama, eastern Japan. (Kyodo)(SELECTION) ==Kyodo

Although Mexico looked the more dangerous in the first five minutes at Saitama Stadium outside Tokyo, Kubo broke the ice with a sixth-minute goal from a Doan cross.

Five minutes later Doan scored from the spot after defender Cesar Montes was carded inside the penalty area.

“This was a result of the Japanese players making use of their technical skills to challenge for the ball and confront opponents head on,” head coach Hajime Moriyasu said. “From good defense to good attacking, the players gave their all. Mexico may be ranked higher, but our guys competed against them as equals.”

Mexico had the lion’s share of possession but had trouble penetrating Japan’s defense, anchored by midfielder Wataru Endo and captain Maya Yoshida. The Mexicans went down a man in the 68th minute when defender Johan Vasquez was shown a straight red for hauling down Doan from behind.

Being short-handed, however, invigorated Mexico. They suddenly found the precision they had been lacking and began forcing Japan keeper Kosei Tani to make a string of saves.

Japan’s introduction of a trio of fresh attackers in the final half hour failed to deliver immediate results, and Mexican substitute Roberto Alvarado scored from his 85th-minute free kick to halve Japan’s advantage.

Japan wrap up Group A play against France on Wednesday. France, who lost their opener 4-1 to Mexico, defeated South Africa 4-3 on Sunday.

“Everyone knew how important this second game was for us,” Yoshida said. “We knew what to expect from our opponents and got two goals by attacking their weaknesses. France still have a chance to advance too, so it’s going to be a tough battle.” 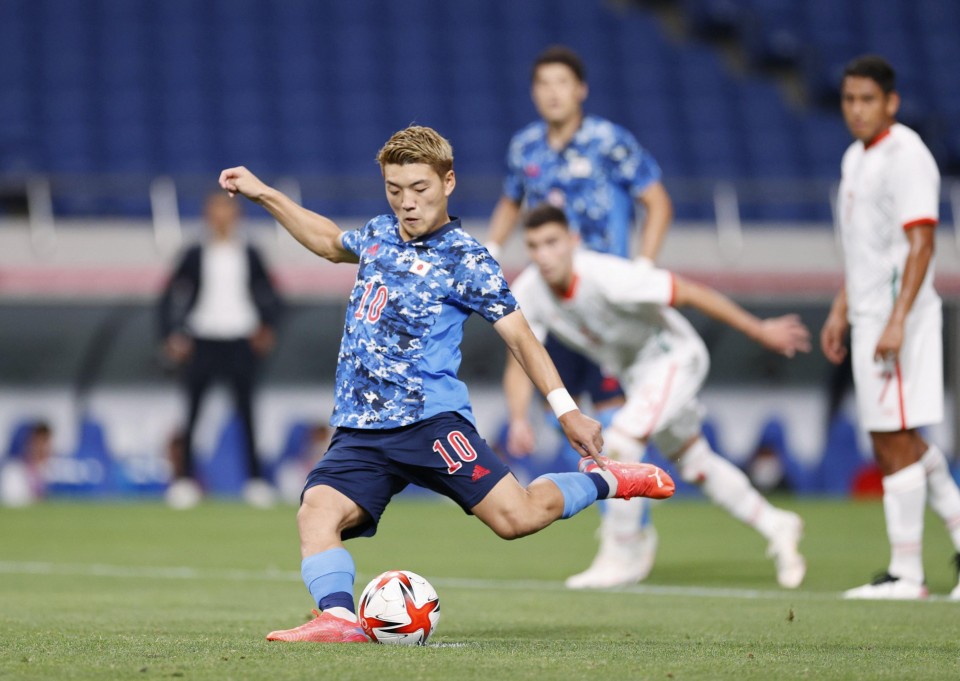 Ritsu Doan scores Japan’s second goal from the penalty spot during the first half of their Group A men’s football match against Mexico at the Tokyo Olympics on July 25, 2021, at Saitama Stadium in Saitama, eastern Japan. (Kyodo) ==Kyodo